January 25 Horoscope Requires Patience From You 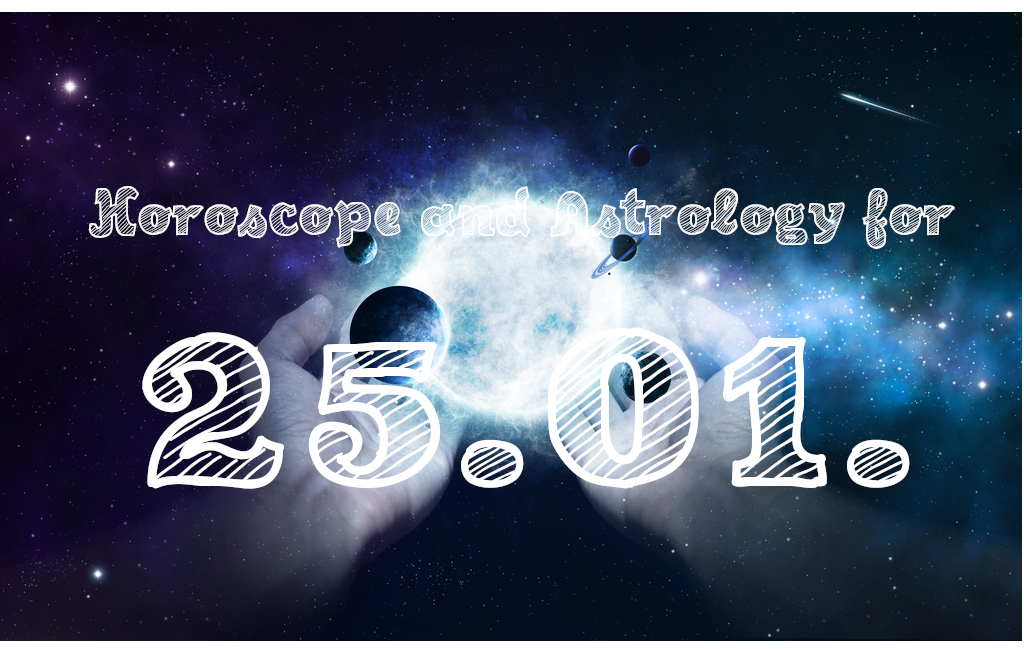 The last days of January are still beginning to feel like the end of the holiday season, filled with family and friends. The January 25, it is time to start preparing for all that awaits us in the coming year. To ensure that this year’s horoscope makes you feel confident and ready for life’s challenges, be sure you have a calendar at home set up with important dates and deadlines, as well as a collection of your favorite songs from last year. You are sure to have an incredibly productive year if the right energy is present in your home.

You can expect a day filled with socializing and fun events this January 25. If you’re looking for love, you’ll meet many different people who will be eager to share their opinions with you about life, love, friendships, and interests without being overly personal or prying. If you feel like there has been pressure on your relationships lately, this will be a perfect break! This evening promises to be full of surprises. Singles could find themselves suddenly interested in someone they’d never consider romantically before. Why not take the risk with this person! They will undoubtedly demonstrate that they are well worth your attention.

January 25 You Can Welcome With Open Arms With These Events

Astrological Forcast For Your Zodiac on January 25

Capricorn – Your patience with specific people is being put to the test, but you’re also gaining valuable lessons about how to cope with similar behavior in the future. It’s not just about them at this point but also about making sure that you don’t waste too much energy on these kinds of situations when there are better ways to spend your time. Goat — There might be something good in store for those who work hard during January 25!

Aquarius –  It’s not that you don’t want to be happy or move forward with your life, but there is a part of you that resists this idea based on fear. Instead of allowing yourself to get stuck in patterns of self-pity, look for ways to challenge yourself and the status quo so you can advance as a person. Water Bearer — You might receive some much-needed help from someone special who isn’t afraid to tell it like it is during January 25.

Pisces – The way you feel about certain people may change depending on the circumstances surrounding them right now. There will be those who continue to stay close while others drift away or attempt to hurt you without cause or warning. Those that prove themselves worthy of your love and loyalty are the true friends that will be there for you in the end. Fish — Love is in the air during January 25, no matter how much you fight it!

Aries – On January 25, you might feel like you could make an effort and change certain things about yourself, but don’t get carried away. Your current lifestyle is working out just fine, and it would be better for you not to get distracted by new ideas that don’t fit into what works best for you. It’s time to go back to basics. The following months will be a frenzy of fresh challenges and possibilities. If your horoscope predicts a break-up in the coming year, spend this week reflecting on what went wrong so you can move forward undeterred by mistakes of the past. Fire Rooster — Keeping up regular communication between family members and friends will be something you work on this week.

Taurus – On the 25th of January, it is time to set some plans in motion. You can rely on your impressive determination to ensure that any new ideas you have are quickly worked into reality. However, don’t overlook what’s currently working for you or who’s essential to you because you need to make a few modifications. It’s more important than ever now that you value what has not changed about yourself and those loyal people around you. Earth Ox — With great discipline and time management skills, many opportunities open up ahead of you this week, both personally and professionally.

Gemini – Although there are certain traditions celebrated at this time of year that hold special meaning for you (or seem to be trending this month), it is a good idea not to stick to them out of a sense of obligation. Instead, consider breaking with tradition and trying something new. This week’s horoscope predicts good luck with public speaking, so seize the opportunity and raise your voice in support of others. Air Twins — Spending more time at home will be the key to your emotional well-being this week.

Cancer – Romance is still blooming for those born under this sign on January 25, but don’t let it distract from daily responsibilities at work or school, where long hours will be required near the end of January. There might also be some confusion related to familiar faces as few close friendships, or family relationships experience a new kind of friction. Remember, you cannot please everyone. Fish — This week will require patience on your part and those around you, but things should fall into place before February ends.

Leo – The next few weeks until the end of February might be filled with some setbacks. Even if you feel like you’re going back into old patterns that aren’t working for you, it’s usually nothing to be concerned about. Lion — On January 25, a special someone could play a role in bringing home good news, so don’t ignore the opportunities they present ahead of time! Be patient and do what works best for you right now, and those attributes will emerge sooner or later.

Virgo – You’ve been working hard this month to improve the quality of your life gradually. Although there’s always room for improvement, keep up the excellent work you’ve been doing since late last year. It may not appear to be much at first, but you will notice a significant difference in a week with patience. Earth — Instead of planning for future events during this week (even if that’s what you usually do), take time to focus on the present moment.

Libra – By January 25, your efforts to make positive change in yourself and others around you are beginning to take effect. This is another perfect opportunity to implement some changes that need to be made. Don’t stop working toward your goals just because progress seems slow or difficult sometimes. Air Scales — The level of emotional support you receive right now will be a crucial sign of how much work you need to accomplish.

Scorpio – Often, during emotionally charged events, some opportunities come up for those who keep an open mind, so don’t miss out on these chances to improve your prospects. Invest more time, power, and money into forming yourself instead of bothering about what others think of you.

Sagittarius – You might feel like your efforts are better spent elsewhere than where you’ve been putting your energy lately (work, school, etc.).?While it’s essential to stay focused in your life, don’t exhaust yourself by ignoring the people who love and care about you. These folks could use some extra love right now too! Centaur — Via phone or text message is the best way to reach someone important to you during January 25.

We’re lucky enough this week to have two different days where we can enjoy ourselves by participating in social events. Look ahead, and you’ll see that January 26 is another day filled with the promise of new friendships and exciting conversations. This evening, show up at a party or join an organization you have always wanted to be part of. You never know who might share secret desires with you that could lead to something much more romantic later on down the road. Keep open ears, eyes, heart, and mind for what life has to offer tonight!